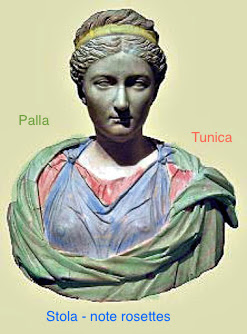 Color by Dulcia MacPherson, captions by me.

I recently presented my stola paper at An Tir’s Kingdom Arts and Sciences Championship as a single entry. You can see a video of my presentation here (20 min talk, 20 min Q&A). Since I know not everyone wants to read a giant tome, I’m going to break up important bits of my paper into a series of blog posts.

The stola was popular for about 400 years (mid-Republic to early Empire), and was integral to the Roman matron’s sense of self. It gave its wearer special social and legal protections.

PART IV: WHEN did they wear this darn thing, anyway?

In the early Roman world, starting in the 5th century BCE, there was a garment called the vestis longa – (“long dress”) worn by matrons. By the 2nd century BCE, it was called the stola, and became emblematic of a respectable married woman. It was hugely sought-after for its legal and social protection in the middle and late Republic. It wasn’t necessarily worn at home, unless you were entertaining guests, but it was essential for going out in public if you were entitled to wear it.

As the Republic shifted into an Empire, the stola lost popularity. For a bigger discussion on “why,” see my paper, but the probable causes included:

For a while, high-status women continued to be immortalized in statuary and paintings wearing stolae to symbolize their virtue, although they didn’t wear one in daily life. Eventually even the metaphorical stola died out.

Wear a stola if your persona is:

30s BCE – about 68 CE: A highly traditional woman married to a Roman citizen (rapidly decreasing popularity – the same thing happened with the toga!)

There’s a more fleshed out timeline on page 32 of the paper. I think this will conclude the blog series.  If you have questions or I’ve made an error, please let me know! 🙂