I have multiple friends who are good at period dyeing. I mean really, really good. Kingdom Arts & Sciences level of good. Seamus, Claire, and Marya spring to mind immediately, and those are just the local ones. Inexplicably, when I wanted to make my wool into something prettier than white…. I did not go to any of them. Instead, two blind girls led each other into the rainbow of experimental dyeing.

The story begins at June Faire. Scotch Broom was EVERYWHERE. I am blessedly free of plant allergies, so to me the flowers were just pretty. To my afflicted friends, they were evil… and an invasive species, so they were dubbed offensive to boot. Sadb decided we needed to dye something with them. 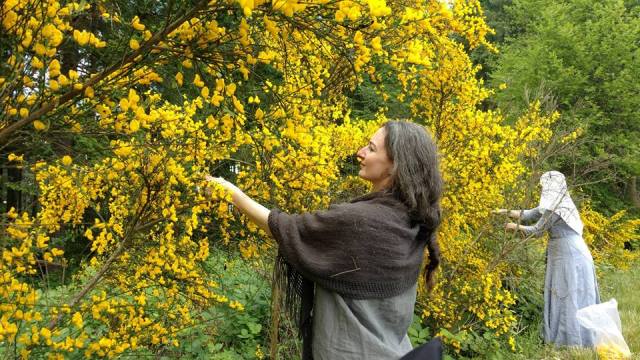 Drusa (foreground) and Sadb industriously stripped bushes with the help of some borrowed tiny, unripe SCAdians. I mostly watched the fighters, but picked some flowers, too.  We filled that bag.

Now that we HAD all these yellow flowers… what to do with them? Yellow is a very Roman color, and I had some off-white wool gauze for a palla… Then Sadb decided to simultaneously re-dye a handknit sweater. Her first attempt with lichen had resulted in a somewhat splotchy tan. 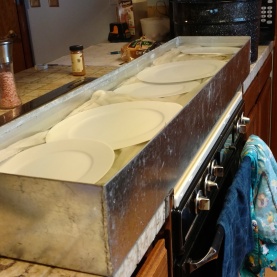 My wool soaking in the mordant. Plates were used to keep the fabric underwater. This long steel box (lying across two stove burners) is actually Drusa‘s – she made it to heat lumber for Norse bentwood boxes.

First, using “A Weaver’s Garden: Growing Plants for Natural Dyes and Fibers” by Rita Buchanan, Sadb and I mordanted our fiber with cream of tarter and alum from the grocery store (spice section). Basically we heated the wools in the solution for an hour, then let them sit overnight. They were rinsed and kept soaking for stage 3.

The second step was making dyebaths. For mine, the Scotch Broom flowers were dried, then powdered, and sewn into cheesecloth bags. Sadb wanted a green for her sweater, so we picked a bunch of English Ivy and chopped it up in a foodprocessor. Neither of these plants were actually in the book… In the best tradition of crafters everywhere, we were kinda winging it. 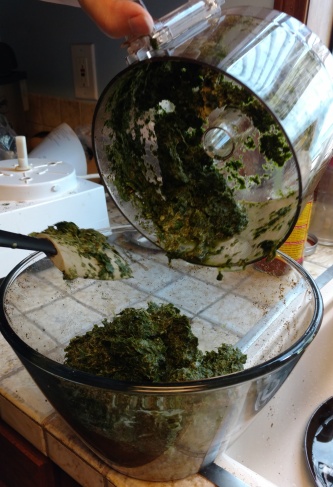 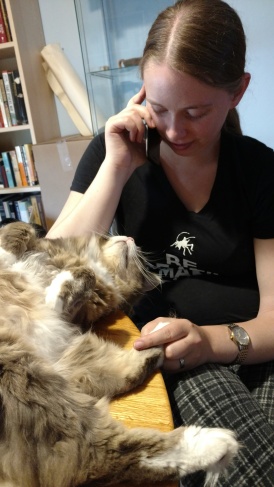 Three iterations of “heat the thing for an hour” means lots of downtime for kitty snuggles.  Percy was happy to lend a paw.

The plant bits were heated in water to 180-200 degrees for an hour (as the book advised) in separate pots, obviously, then left overnight (as Sadb’s friend suggested). My Scotch Broom bath was a brilliant red-orange at first, but in the morning had turned brown. Oxidation? Or just additional pigments coming out of the “teabags” with a long steep? The Ivy bath was a really gorgeous green! I thought she’d hit the jackpot. 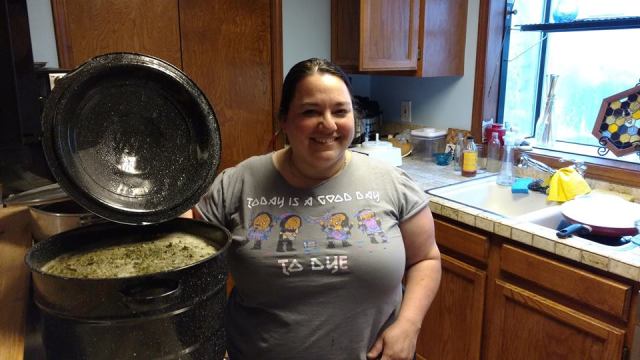 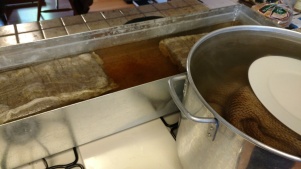 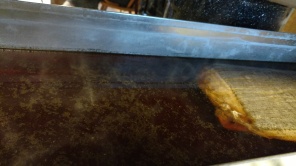 We then removed the plant matter from the dye baths, and heated the wool in their respective baths. Stage Three! 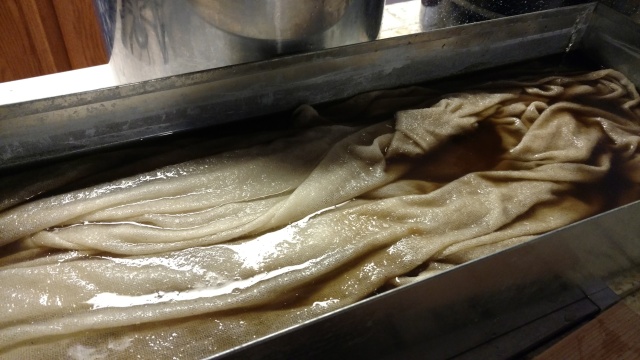 Again, 180-200 degrees for an hour (as the book advised), then left overnight (as Sadb’s friend suggested). The fabric was rinsed and allowed to dry.

Final products: My palla, although not the bright sunshiney yellow of the flowers, is definitely yellow. The sweater is still brown, but a nicer, more even shade. 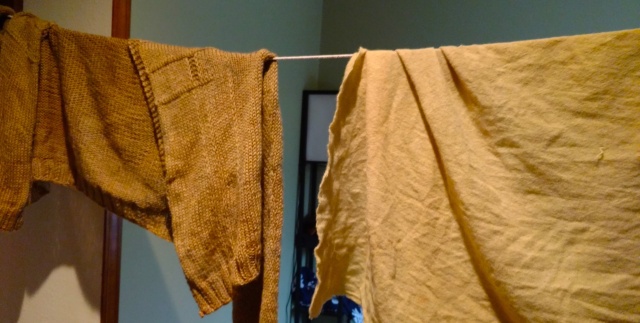 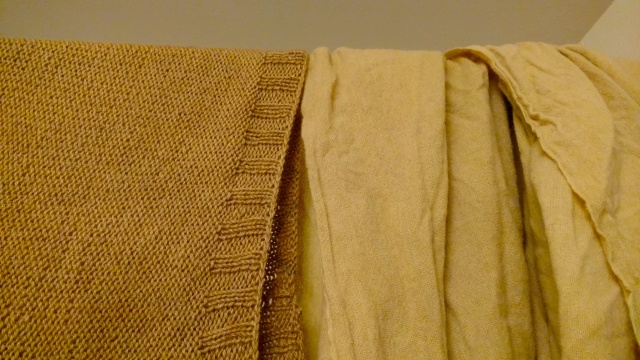 So… not a COMPLETE success, but a partial one. 🙂 I’ll be wearing my yellow palla at events!

Sadb says “We did a thing! It made a mess in Tullia’s kitchen and was also fun!”

RE: Period-ness of our process: Sadb notes that we used modern gas stove burners and thermometers -things that make it much easier to control temperature. And our pots were steel, enamel, or aluminum. Copper and iron are both used as mordants, so dyeing in them would produce different colors. Getting the right alum may have been a very different process in-period since there are many different types of alum. [She doesn’t] know how they would have differentiated between the different types or if they differentiated at all, which would add another element of chance to the process. Cream of tartar is a by-product of winemaking so it would probably be relatively easy to get.

Note: I am surprised to learn it’s not made by grinding up Tartars.