The original: “Roman gold and hardstone amuletic bracelet. Eastern Empire, circa 1st-3rd Century A.D. – The gold bracelet in the form of a bangle, oval in section, each end wound spirally along the hoop, with seven amulets or beads, including an amber bead, a carnelian phallic pendant with gold mount, a spherical banded onyx bead, a pointed agate pendant suspended from a gold loop, an amber bead with drilled detail, a rock crystal pendant with gold mount, and a haematite pendant. |  Bonhams ” Sold for $9,406! 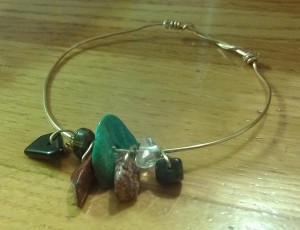 Click for a bigger view. Both have adjustable sliding coils, and both have 7 stones. Mine has three strung directly instead of four because I had three appropriate stones that slid onto the wire 🙂 but they both alternate pierced directly vs. suspended. I couldn’t do the pretty gold end caps, so they are strung on wire like the original center stone. Hematite, turquoise, onyx, rock crystal, agate, and tiger eye (supposedly carried by soldiers for good luck according to some undocumented websites, but I have not been able to verify that). I used gold-plated wire. This was made as a prize for the 2014 Tri-Barony Yule Champions Choice A&S Competition.