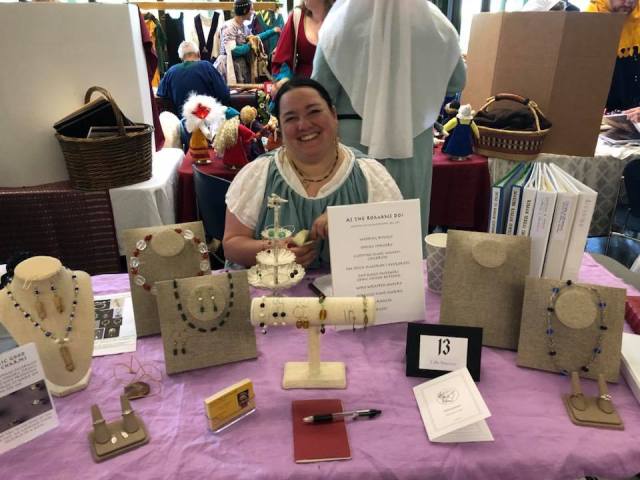 Yesterday was the first – but certainly not the last – An Tir Athenaeum. It was an Arts & Sciences “display for comments” event. Basically I signed up for a table, put out my jewelry and papers, and had enlightening chats with people all day, surrounded by a sea of tables with OTHER peoples’ fascinating work. No forms, no judging, no losers (we were all winners!). It was a delightfully welcoming format. 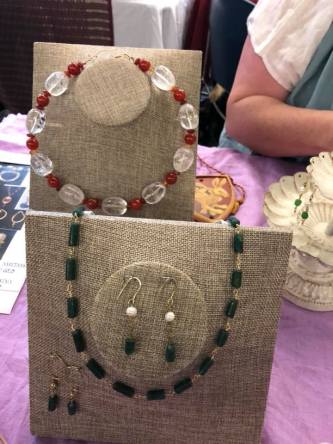 My standard patter went something like this: “When I first started making jewelry, I was doing assembly and wire wrapping, [using pen to point at a piece or two], duplicating finds from the late Republic / early Empire, mostly from Pompeii [pointing to stand-up with photos of museum artifacts]. Then I wanted to learn metalsmithing. I started soldering and did this Hercules knot series, with two different types of links [pointing the links out] and culminating in my wedding rings… [point]… then I got married [point to folder of Roman Wedding Rituals – usually a “Oh! Really? Congrats!” happened here]. 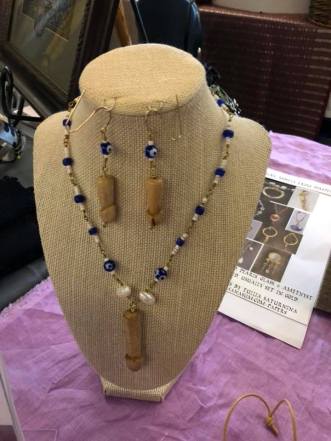 “…and last weekend I finished these good luck pieces [point to phallic rings and charms]. Being protected from the evil eye was very important in Roman culture. In fact, this combo with the eye beads [point to necklace] keeps you so safe you can probably get a discount on your chariot insurance. [grin]”

What I was *expecting* was some feedback on my soldering technique, or other metalsmithing tips. What I got instead was *much* more valuable: I refocused on what was important (learning and making stuff). I finally let go of trying to use period methods. Realistically, I cannot study full time for years, the way period jewelers would have trained, using primitive tools but advanced techniques. I don’t have slaves for cheap labor. The price of high karat gold is prohibitive, and many of the things I wanted to do just won’t work the same way with other metals. Instead of struggling and making myself crazy, I’m going to attempt period methods where I can, and use modern tools when I need to.

I also had some really fun conversations with other jewelers about solving construction problems (Tamlane and Thangbrand, I’m looking at you!) and Elanor was stupendous in getting me reoriented towards *researching* period methods but working modernly. I made a new bead friend who will make me melon beads and other Roman-appropriate components for future projects, Ionamyst. I chatted with a gent interested in period lapidary, too! I geeked out about Etruscan skillsets and so many other wonderful things… it was glorious.

Remember that bracelet I wanted to duplicate? It required soldering, dapping, and casting. I am doing pretty well with the soldering at this point,  thanks to Fjorlief InHaga, and I can figure out the dapping, but I needed some help with the casting. I now have a casting playdate later this month with a new friend! Details to follow…

And I did get some breaks to go wandering. The Madrone Culinary Guild fed me yummy things. Ysolt Taylor of Windhill gave me some heavenly quince sekanjibin. I thoroughly enjoyed meeting Bergdis Thorgrimsdottir and learning about period maps. She explained the Roman road map to me, which had never made sense before! ❤ Towards the end I spied some extraordinary leatherwork but my brain was just too full to sit and chat. What a wonderful day!!

The only sad note was that Drusa was sick. I set up her display anyway: 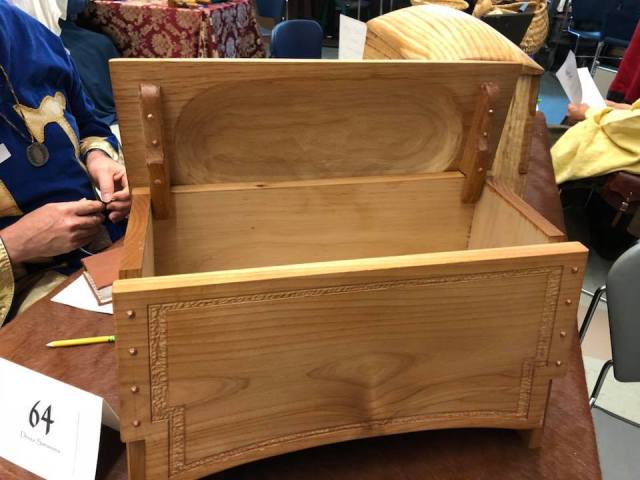