Pardon me while I hijack my own blog here… I don’t have another place to write about this and I really want to share it! Learning how to do metal-smithing to make Roman jewelry made me realize I could make my own solar system necklace. This was a design I came up with about a decade ago (Before ThinkGeek came out with a similar one – I’ve always been a science dork). I always thought I’d have to commission a jeweler to do it for me… but with my teacher Fjorlief’s help, I made this!

First I had to find all the stones. I wanted them to reflect the color and relative sizes of the real celestial bodies, but not quite to scale. 🙂

For the sun, amber was the obvious choice. Note that it’s the only serrated bezel – all the others are flat. Mercury (right) is represented by jasper. Jaspers are incredibly varied. I found one that was interesting, but still mimicked the planet’s grey. 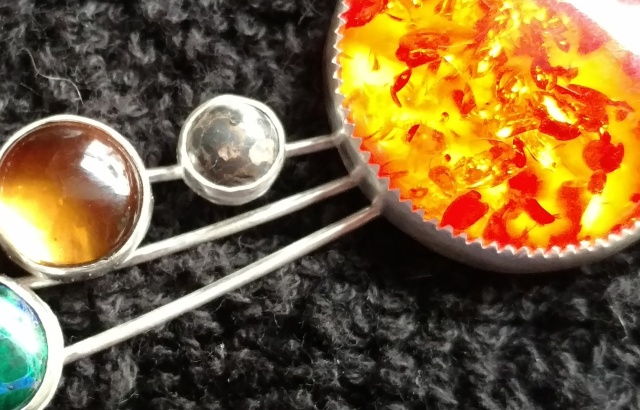 Venus was initially going to be citrine, but I wound up using whisky quartz. I love its deep, warm hue. I tried to use translucent stones for the gas planets, and opaque ones for the rocky planets, but I ran into some issues with that, as you’ll see.

Earth, of course, is azurite with malachite. I used a tiny seed pearl for our moon. 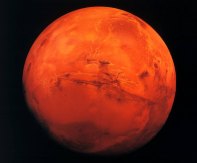 Mars is carnelian. The planet is red because it’s covered in an iron oxide, like this red jasper, hematite, and tiger eye combo known as “tiger iron.” Using a red iron oxide cabochon would have maintained my rocky/gassy distinction, but I adore carnelian, and couldn’t resist the Roman connection. However, I am crazy in love with tiger iron and bought two settable pieces at a gem show last weekend. Expect to see a striking modern project with them in the near future. 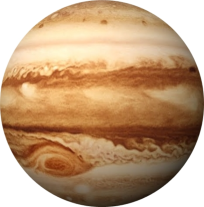 Jupiter was the one I started with: I knew finding a jasper cabochon with a “big red spot” in an appropriate size range was going to be a challenge, and I was right. I found it first, and based the sizes of all the others on my prize (Because gems online are often sold in packets, I actually have enough of everything else to make at least one more necklace like this… except for Jupiter). Okay, so the spot isn’t red… but it reads like Jupiter. Consider my necklace the Michael Bay version of our solar system, eh? 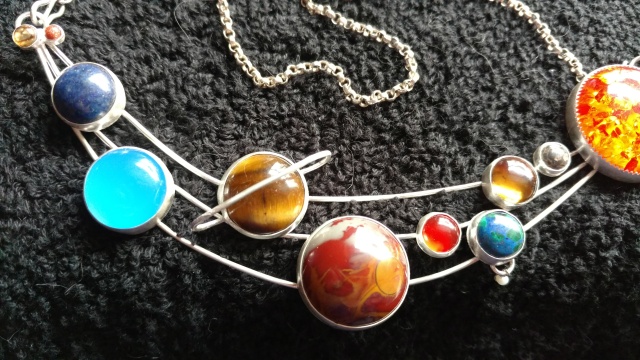 Saturn, with its tan stripes, was a natural for tiger eye. The rings were a design challenge. I had to solder the ring on sideways, and bend it up into shape (very carefully!) after the stone was set.

Neptune, a darker blue gas giant, should have been blue labradorite. I simply couldn’t find a blue, round cab in the right dimensions. I ordered quite a few online, but when they arrived they were too pale to use. I learned all about Etsy and eBay refunds. Ug. And I settled for lapis. 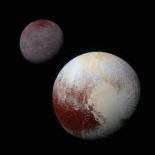 Pluto and Charon (abalone and goldstone) are included as a nod to my first date with Robert. At the end of the evening, I waited at the bus stop with him. It was a cold night, and he tucked me inside his jacket. He handed me one of his earbuds and we listened to “I’m Your Moon” by Jonathan Coulton, which I’d never heard before… it was like something out of a movie. He moved in three months later, and that was nearly six years ago. 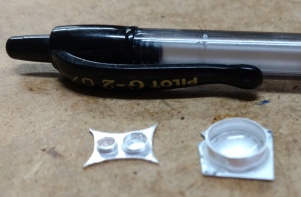 The tiny double-bezel setting was a fun technical challenge, as well.

To make all these bezels, I cut strips from a plate of silver. This was my first gem-setting piece, and I learned a lot about how to accommodate the differently carved stones. Some had sloped sides, while others rose nearly straight up. Each bezel had to be the perfect height to just grab the edge of the curve on the cabochon. 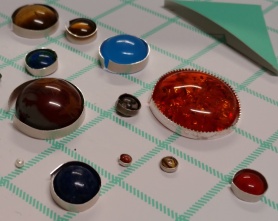 Once I had the strip of silver, I had to cut it to precisely the right circumference. Too short, and it won’t close around the gem. Too long, and the rock will rattle around and possibly escape its cage. Then I soldered the strip into a ring. 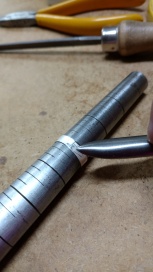 The rings were then sanded, rounded, and burnished (rubbed with a smoothing tool) on a mandrel to minimize the join. Tiny backplates were cut, and the rings were soldered onto them. Then the excess backplate was cut away, and there was more filing and polishing. 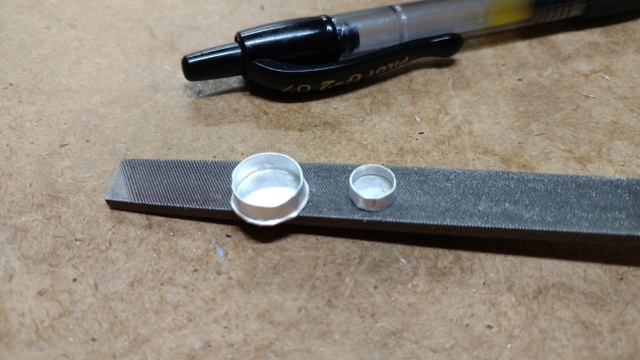 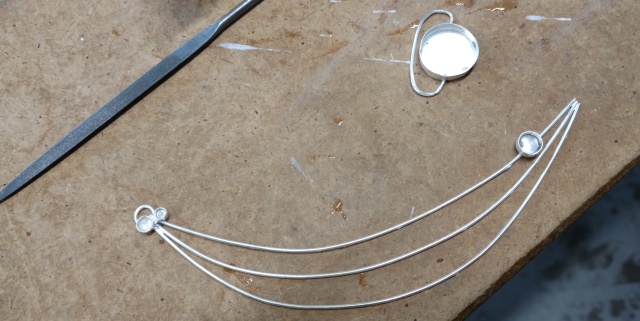 Meanwhile, I soldered three silver wires together to form the backdrop and brace. Then one by one, the bezels were added to the wire. Well, nearly one by one. I had to put the bezels face down, and pin the wire into place at the correct height to solder them seamlessly across the back. Because the bezels were a variety of heights, I had to do them in order… shorter ones first, then stepping up in size as I went. At any point, if I didn’t get a solid connection between the bezel and the wires, I had to redo it. Each soldering meant painting the target surfaces with flux, cutting tiny bits of silver solder (using three levels of solder with different melting points) and using tweezers to place them at the join point, using a torch to melt the solder but not the main piece, quenching the metal in water, then letting it soak in a pickle solution to remove the flux residue and oxidization. I had to cycle through that series of steps before I could solder on the next planet. 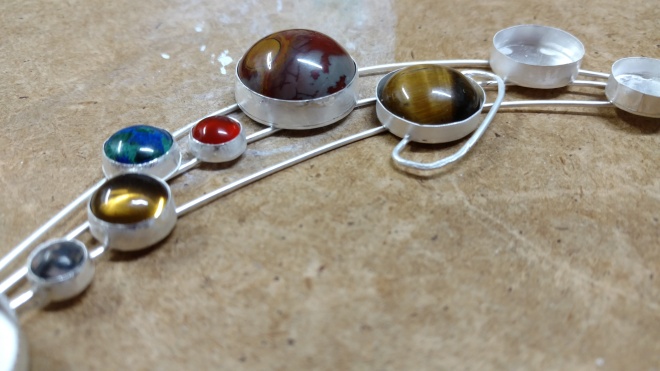 Notice that Saturn is not yet set – the bezel walls rise straight up and seem “too big” for the curved top we’re seeing.

Finally, I got to set my stones! This meant very gently pressing around the bezel, a little bit at a time, to smoosh the silver over the curves. More polishing… bending Saturn’s ring up into position… I had to file away some texture from our moon’s loop, because I nearly melted Earth. You can see the difference on the back… there are some real-life parallels here with human-created warmth threatening the planet, but I’ll just leave those to your imagination. 🙂

Then I made some S-hooks from silver wire, re-purposed an old silver chain, and used wire-wrapping to attach the seed pearl Moon to Earth. BAM! I felt a little like Q! 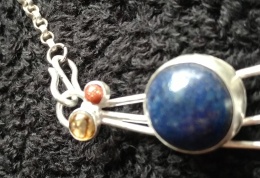 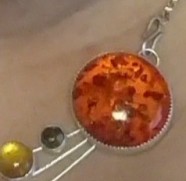 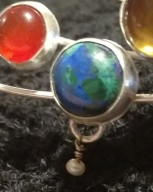 Things I was going to do and didn’t: I got some stone chips that I was planning to wire in as the asteroid belt. I decided against that, as it would have been too busy. Also, I sourced a tiny blue bead to represent the TARDIS, but felt at the last minute that it would spoil the look. 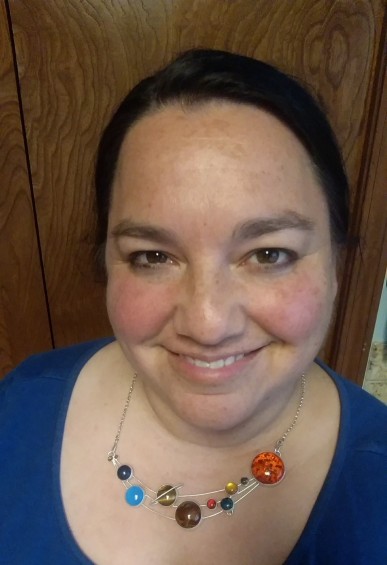 It’s not perfect – it’s my third soldering project, my first in silver, and you can tell… Heck, I soldered Pluto & Charon onto the wrong end and had to reverse the whole thing! But all the goofs are on the back side or don’t matter and it makes me SO HAPPY!!! To be able to draw a thing… Hunt down the perfect stones… And make it come to life with my own hands… It’s a miracle.