In our kingdom, An Tir, we have lots of Norse / Viking personas, who love to hang their awards and momentos on necklaces… usually lots of them! While it’s fun to be able to “read their resume” at a glance, I knew that wouldn’t work with my Roman persona.

I’m extremely pleased that I came up with an idea, and even more excited that the talented Fjorlief InHaga (acorncottageartisanry at gmail.com) was able to bring that concept to life!

I designed some tiny round enamels, to be used as gap-sleeve fasteners. They are about half an inch across. We settled on pins rather than buttons for ease of laundering. I feel okay about the anachronism (the originals were sewn-in buttons) since the artwork isn’t Roman anyway.

These are the Golden Torc (a service award from my beloved Barony of Three Mountains), phoenix (symbol of a champion of 3M), the Arts & Sciences window arch & candle, 3M, the An Tir populace lion, and my personal heraldry, representing my Award of Arms.  Sadly they don’t show in the portrait shot, but I’m including it for context of the stola strap. 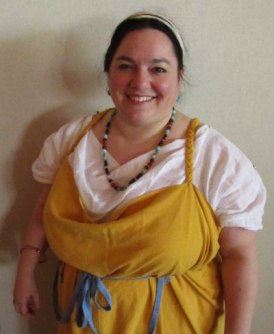